This year is the 30th anniversary of the Triangle workshop, which first took place in Mashomack in upstate New York.  I attended in 1983 and again in 1993. My studio space was on the cavernous top floor of the big old dairy barn and I have vivid sensual memories of the hot dry space.  Other artists were strewn throughout the barns and outbuildings, while the sculptors worked outside.  For lunch, we sat on the grass under the trees and feasted on the tasty food they trucked over from the club house.  (It was an old dairy farm, but converted to a fishing club.) 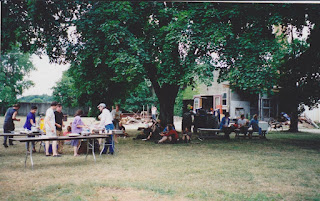 As a painter of landscape, I revelled in the surrounding scenery with its gently rolling hills and expansive cornfields.  One of the visiting artists, Graham Nickson,  suggested that I set up outside and go crazy with big cans of oil paint : 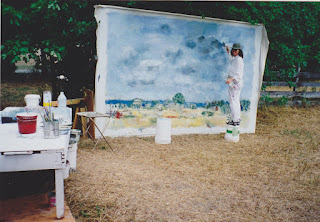 It was a challenge, but fun.  However the hardest part was getting the cans of oil paint back to Canada. I couldn't pack them with me because they are considered flammable; and none of the courier companies would accept them for shipment to Canada.  Finally, another artist came to my rescue.  Ron Shuebrook very kindly put the box into his vehicle which he was driving back to Ontario, and then put the paints on a bus to Vancouver.  He was a true friend.
Posted by pat at 22:19