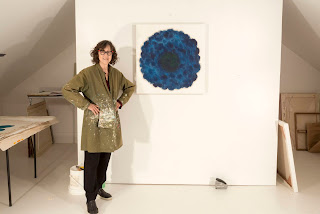 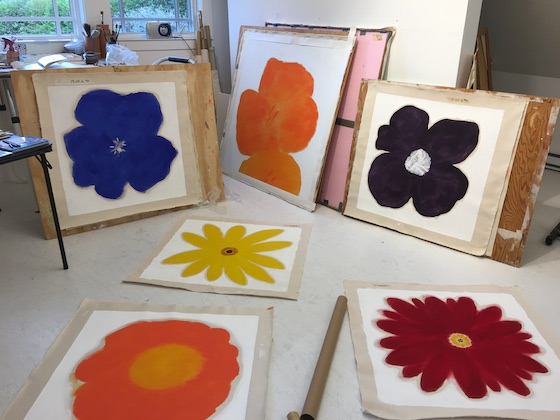 The subject of flowers is, in every sense, central to the new series of paintings by Pat Service.  Departing only slightly from her almost constant concern with depicting broader aspects of the landscape, Service has made an abundant sequence of square canvases, in sizes ranging from 20 x 20 inches to 42 x 42 inches, each holding, at its centre, identifiable portrait of a single blossom. Detached from stem, leaves or even a background shade, each unique flower head appears, greatly magnified, like a target, flattened and alone within a square frame, the arrangement reading like a hypnotic spiral analogous to the actual formation of a blossom in nature.

These bold flower paintings seize and touch the viewer in an instant, in a way that only a painted picture can do and, of course, further unhurried inspection reveals a richness at the heart of the thing. Each represents a different botanical specimen presumably based on a real life sample but it is clear that realist portrayal is not at issue here. Pat Service is merely an admirer of natural bouquets not an expert horticulturalist. All the same, like all of Service’s work, The Flower Paintings find origin in the surroundings of her life and observations but interpretively expand upon the dull limits of outward appearances. Only the small circles, signifying pistils, anchoring each floral shape at its centre have a peculiar exactness intimating a notion of plant science but ultimately make no concession to accuracy or illusionism. From painting to painting, each monochrome palette varies hues that are only casually attendant to the natural spectrum. Mainly the paint is applied on its own terms abjuring the contours and folds faithful to delicate petals in favour of examining the plain and uncomplicated contour of a flat canvas. Thinly, I think, at first and never awfully thick, a loose but solid wash forms the general silhouette of each bloom over which short, sturdy, brusque strokes of the same colour introduce textures and nuanced, layered tones pushing the colour to the edges of the petals, ragged in places with the unfussy dragging of a dry brush. Around the outside contours of each posy is a thin strip of raw, un-primed canvas like an outline separating the spectacular, large flower from the surrounding negative space remaining in the frame. The negative space is painted white, titanium white, making the lack of spatial definition a deliberate and integral element of the composition, the thin border of ivory white, unpainted canvas left around the flower describes the line of an invisible drawing.

The tradition of floral painting and its connotations for the cycles of life, domestic comfort and ephemeral glory reaches back to the ancient world. It also drags disparaging associations of a dainty banality, a cloying impression of amateur crowd pleasing so-called feminine art. At a glance, Pat Service’s flowers can remind a viewer of the particularly delicate, somewhat Victorian custom of pressed flowers but in another glance, this bold art bears a stronger and favourable comparison to Andy Warhol’s 1964 Flower Paintings. To my mind, the similarities are most obvious in the square formats used by the two artists and in the matter-of-fact flat applications of vivid colours often incongruous to the shared floral subject.  Of course, Warhol’s flowers are silkscreened from a found magazine image and Service has painted hers by hand but there is a clearly generic character to either series. Neither Andy Warhol’s or Pat Service’s versions of this subject are really about flowers.  This work concerns the vital act of portrayal, of working paint and colour and form to render a familiar theme in an unfamiliar way and convey the essence and ordinariness of beauty. 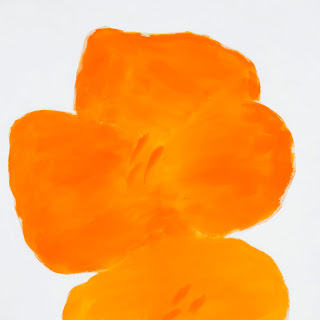 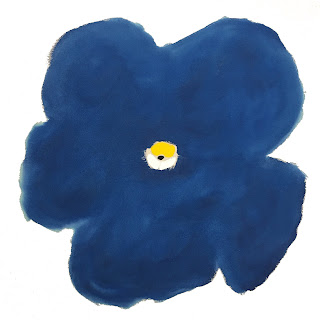 Reading About Other Artists

I have read quite a few good books about artists lately.  There are so many biographies around now, fat books that take a long time to read.  I find them fascinating; it is endlessly interesting to read about the struggles and the successes.  'Lee Krasner, a Biography' by Gail Levin; 'Agnes Martin Pioneer, Painter, Icon' by Henry Martin; 'Edward Hopper An Intimate Biography' by Gail Levin; 'Joan Mitchell Lady Painter' by Patricia Albers are examples of the many you can find in your favourite bookstores (mine happens to be Pulpfiction Books on Main Street here in Vancouver - or if you are in the depths of Kerrisdale, Hager Books will find them for you).

'Ninth Street Women' is a heavy tome that was sitting on my friend Bob Christie's desk when I was in Saskatoon a while ago.  Pretty soon it was sitting on my desk also.  The author Mary Gabriel chronicles the lives of female artists who were very involved in the abstract expressionist movement but didn't get the attention the guys got.  Now it seems to be their time - some fabulous paintings are hitting the auctions with great success.

Myself, sometimes I feel like an imposter because I didn't go to art school and didn't start painting until I was over 20.   That was not the problem with these artists.  They were fully engaged in the process of painting and learning to paint and figuring out how to get better from an early age and completely committed to the challenge.  They were driven in a powerful way to make canvases, engaging new and innovative ways to put down the paint. 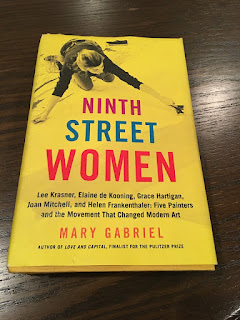