When I was in Edinburgh this month, I went to the National Portrait Gallery, which has just re-opened after a major renovation.  There are some very modern exhibition spaces now, as well as some of the more traditional galleries that have been retained.  It is quite stunning.

Amongst the many old-fashioned (boring?) portraits there are some recent ones that are very refreshing.  Ken Currie painted "The Oncologists" in a serious way.  And there is a lively painting of Peter Higgs by Lady Lucinda Mackay that  I liked very much.  When I told an old friend about it at dinner that night, she said, 'Oh, we have two sketches by her."  I see that the writer Alexander McCall Smith dedicated his novel "44 Scotland Street" to her.

There is much to explore in the old/new museum and I hope to have more time on my next visit to Scotland. 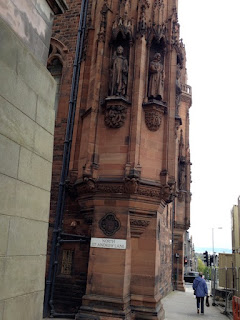 Do You Throw Out Old Paintings?

Last summer I went through some paintings from the 90's and with the help of my granddaughter, I made decisions about which to keep and which to destroy.  That went along very well, until one morning I woke up and realized with a sinking feeling that I had thrown out a painting that I really liked.  "Throwing out" means cutting it up into small pieces and putting it out into the garbage.

My friend Bob has told me not to do this.  Although I thought enough time had gone by for me to be able to clearly sort the wheat from the chaff, it is obvious that I couldn't.  Lately I have been looking through some even earlier records from the 80's, and I can see that I often threw out paintings that I wish I hadn't.

Reading in The Art Newspaper about the famous artist Gerhard Richter, I see that he has thrown out numerous paintings during his career - but only after they have been photographed.  "Sometimes, when I see one of the photos, I think to myself: 'That's too bad; you could have let this one or that one survive'," Richter is quoted as saying, but added: "Cutting up the paintings was always an act of liberation."

I don't even have good photos of the ones I destroyed.  But some of them did need to go.
Posted by pat at 23:17