Tony Caro will be missed by many artists, especially the Canadian ones who met him at workshops here in Saskatchewan at Emma Lake or in upstate New York at Triangle.  He was a great role model, with his engaged approach to making sculpture and his enthusiasm for new work.  When we went to London, if we phoned him we would be sure to get an invitation to his studio to look at what was going on there.  Afterward, over an hospitable glass of wine, he would enquire after our own progress and  make us believe that everything was possible.

Here is a photo of him at Triangle Workshop: 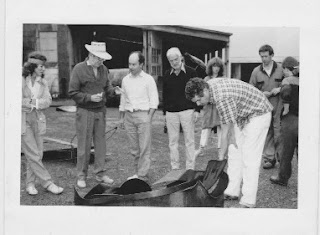 That is Darby Bannard closely examining a sculpture, while Tony keeps his council directly behind; in 1983 he already has his white hair and beard.  Clement Greenberg is the one in the hat, but I can't remember the names of the others.  That is me on the left, thinking I was very cool I guess.  The photo is courtesy of Cora Kelley Ward, who documented much of that workshop.
Posted by pat at 03:30